MT. IRON— A solar panel manufacturer, that has claimed millions of dollars in public subsidies since opening in 2011, has laid off all but two workers and faces an uncertain future after its top … 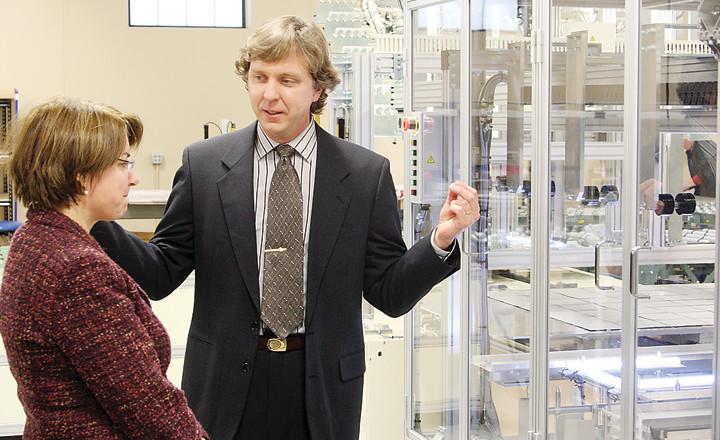 MT. IRON— A solar panel manufacturer, that has claimed millions of dollars in public subsidies since opening in 2011, has laid off all but two workers and faces an uncertain future after its top management was let go by the company’s primary investor, Jong Limb, president of Irvine, California-based Newport Partners.

Silicon Energy’s Marysville, Wash., manufacturing plant shut down earlier this year, leaving fewer than a dozen workers remaining at the company’s Mt. Iron facility. But Limb laid off most of those workers in recent days and there’s no indication when the company might begin manufacturing panels at the plant again, if ever.

The company has struggled since it opened and was never able to achieve the employment targets it had set as part of the financing package that brought the company to the Iron Range.

The company manufactured a rugged and high quality solar panel, but its high cost put it at a significant disadvantage in the solar panel marketplace, where prices have fallen dramatically in recent years.

The company’s business model required significant subsidies, and those subsidies came under increasing scrutiny in the Legislature last session. With many solar panel subsidies set to expire next year, the future of the company was looking increasingly tenuous, according to knowledgeable sources who spoke to the Timberjay on condition of anonymity.

The Iron Range Resources and Rehabilitation Board provided most of the public funds to bring the plant to Minnesota. As recently as last year, the agency loaned $1.95 million to the company to fund manufacturing of a lower cost panel that company officials said would qualify for additional subsidy and give it a competitive advantage over another Minnesota manufacturer.

In addition to loans to the company, the IRRRB funded a multi-million dollar solar panel purchase program for northeastern Minnesota cities, which required the use of Silicon Energy panels. The IRRRB also provided a $3.6 million non-recourse loan to the Mt. Iron Economic Development Authority to fund infrastructure, including construction of the 25,000 square foot building that has housed the company’s operations since 2011.

IRRRB officials did not respond to a phone message seeking comment for this story. Silicon Energy officials could not be reached.