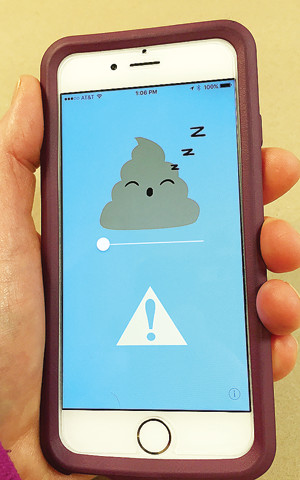 EMBARRASS- Red Pine Media, a home-based software and internet company based in Embarrass has made their mark focusing on the things they know best. Up to this point in time, that meant producing high-quality mapping and GPS software for fisherman, snowmobilers, and canoeists.

But EmiLy and Ryan Quick have strayed a little off the outdoor path with their newest app, called Flatuflage.

“I had this idea a few years ago,” said EmiLy, “about having the phone make noises for me.”

As Ryan honed his programming skills, the idea came back to life.

“It’s super fun,” she said, adding it had become a true family project with their 12-year-old daughter, Theo, designing the artwork for the new app.

“A lot of people will joke about it,” she said, “as they try to make some noise, do some extra flushing, or cough while in a bathroom stall.”

This app will “save water, save the planet, and save your dignity,” she said.

The app has a simple single screen interface, with a slider button, which makes your phone emit camouflaging and inoffensive sounds as you slide the button to the right (to control how loud the sound gets). The app also offers an “emergency” mode, which emits a loud burst of noise with a single tap.

EmiLy said this app is something she thinks others will find useful, and that kids find it fun. She added that it reduces the anxiety for those who are embarrassed to use public toilets.

The description of the app asks, “How much is your dignity worth?” If it’s worth at least 99 cents, you might try the app out. It is available currently in the Apple App Store for iPhone, and will be available any day in the Google Play Store for Android smartphones.

The app has only been for sale for a few days, so Emily was not sure how much appeal it would have. The couple plans to start marketing the app on social media and other venues and hopes it will generate enough interest to get noticed in the crowd of new apps that appear each week.