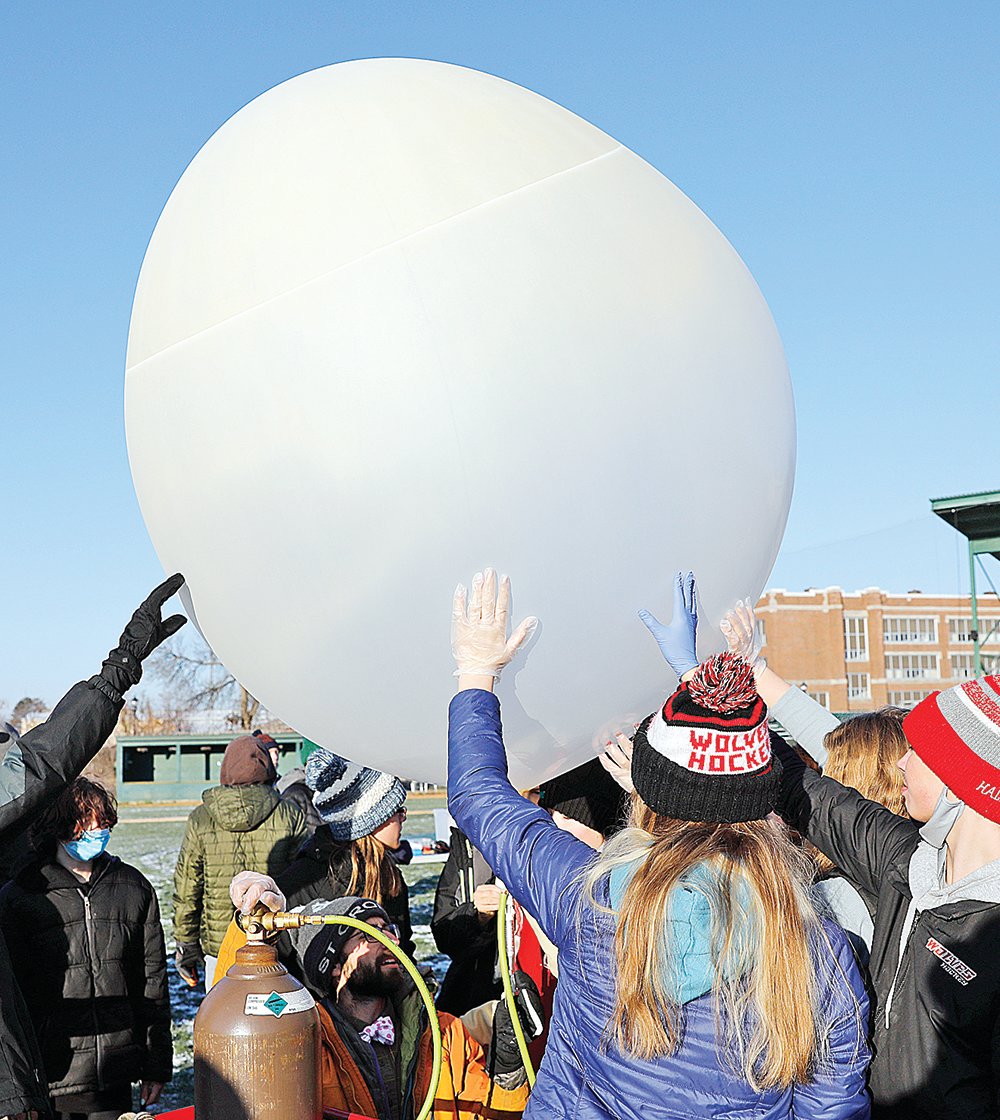 ELY-Ely Memorial Junior High School students launched the Timberwolves 4 weather balloon last Thursday morning from the school’s baseball field.
Science teacher Matt LaFond had planned for the event Nov. 2 when favorable northwest winds were blowing over Ely, but consistent cloud cover prohibited a launch.
“Federal Aviation Administration rules don’t allow for such an activity when cloud cover is at more than 50 percent,” he said.
Bright sunny skies and brisk temperatures greeted students from two eighth-grade science classes early last Thursday.
“Our predicted flight path looked safe for the payload, but we had flotation aboard the balloon’s experiment package. We preferred to avoid landing in the lake if possible,” he said.
Surface winds initially directed the balloon to the north, toward the city’s cemetery, but once Timberwolves 4 gained altitude, the winds aloft quickly pivoted the balloon in a predicted southeast direction.
This is the third consecutive year for LaFond’s science class weather balloon launch. Last year, due to COVID-19 hybrid learning protocols, two separate launches were made to include both classes.
“So this year we named our experiment Timberwolves 4,” he said.
Dozens of science students gathered near the pitcher’s mound of the baseball field just after the start of school last Thursday. The eighth-graders were divided into a variety of section responsibilities including helium tank transport, balloon handling, inflation, payload, tracking, and equipment.
Small direction-finding balloons were launched to verify the flight path of the payload.
Inflation began precisely at 9 a.m. Only those students who wore rubber gloves were allowed to touch the rubber fabric.
“The oils from their skin could degrade the rubber,” LaFond said.
Students gathered in the crisp fall air to watch the launch from the bleacher area. Timberwolves 4 was launched at 9:15 a.m.
“This weather balloon carried aloft a parachute and a wooden frame,” LaFond said. Attached to the wooden frame was a flight computer, a SPOT tracker GPS, a Go Pro camera, and a couple of experiments designed by the students to see what happens at the cold low pressure of the lower stratosphere.
As predicted, the balloon rose to reach an altitude of about 22km. The balloon then popped, and the payload and experiments and equipment drifted down to earth under a small parachute.
The payload traveled about 60 miles and landed just inside Lake County, north of Brimson and close to National Forest Road 15, according to a tracking website. LaFond said he was going to attempt to retrieve the payload.