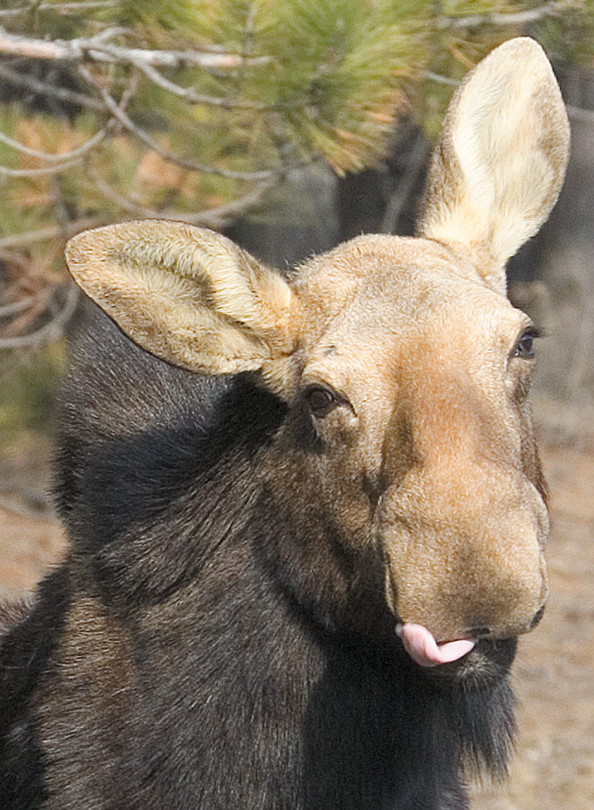 Moose are known to be vulnerable to a number of parasites carried by deer, which may be contributing to the decline of moose in northeastern Minnesota. The DNR is proposing changes that could make it easier to manage parts of the region to benefit moose over deer.
file photo
Posted Friday, February 26, 2016 9:00 am

REGIONAL— The Department of Natural Resources is proposing boundary changes for several deer permit areas in northern Minnesota to make it easier to manage for the differing needs of moose and whitetail deer. The proposed changes, which will impact deer permit areas 176, 178, 127, and 122, among others, would take effect this fall. The proposal is an effort by the agency to more closely align deer permit area boundaries with the region’s primary moose range.

Minnesotans will have until Sunday, March 13 to comment on the new proposal. Complete details on the proposed changes will be available on the DNR’s website at www.mndnr.gov/deer as of Friday, Feb. 26.

The need for change

It’s been known for years that whitetail deer carry parasites that are harmful to moose, and that increases in deer numbers in northeastern Minnesota in recent decades appear to have caused a rise in health-related mortality in the region’s moose population. At the same time, other researchers point out that higher deer numbers have helped sustain more wolves on the landscape, which appears to be reducing the survival rate of moose calves. It’s been a one-two punch for the region’s moose herd, currently estimated by the DNR at just over 4,000 animals.

“In response to the moose population decline, Minnesota’s moose management plan requires us to manage for lower deer densities in the moose range,” said Adam Murkowski, DNR big game program leader. “Fewer deer in the moose range minimizes the risk of parasites or disease spread by deer that harm or kill moose.”

But the desire to help moose created concerns for deer hunters in the region, particularly in permit areas that included land both inside and outside of the moose range. Some hunters were concerned that managing for lower deer numbers was limiting their hunting opportunities, even in areas outside the primary moose range. Tower Area DNR Wildlife Manager Tom Rusch says the latest changes represent an effort to “fine-tune” the permit area boundaries, to help address concerns of deer enthusiasts, while still limiting deer numbers in the heart of the moose range. “Aligning deer permit area boundaries to the known moose range is part of the DNR’s strategy to promote the health of moose populations in northeastern Minnesota,” said Murkowski. “The nice thing for deer hunters and wildlife watchers is this proposal also allows for growth in deer herds outside the moose range where more deer on the landscape won’t negatively affect moose.”

Members of the northeast deer goal-setting team encouraged the DNR to reconsider deer permit area boundaries out of concern for moose and interest in boosting deer populations where appropriate. The DNR made similar adjustments in the northern part of the moose range in 2010 in response to recommendations of its moose advisory committee but did not adjust deer permit area boundaries in the southern portion of Minnesota’s moose range. This latest proposal would now accomplish the change across the entire moose range.

According to Rusch, the new permit area boundaries take a number of factors into account, including the habitat involved, the land ownership, and the land use. Most of the moose range encompasses Superior National Forest, where the vast majority of the land is in public ownership and the land is heavily timbered, with relatively few private residences.

The presence of humans is another factor that appears to be playing a role in the moose decline, particularly since artificial deer feeding concentrates deer in some areas and limits moose numbers. “The Fernberg Road is a classic example of that,” said Rusch, noting that deer feeding along that nearly 30-mile long corridor east of Ely has increased deer numbers and all but eliminated moose. He said well-established deer feeding in Eagles Nest Township and near Isabella appears to be having similar effects in those areas.

The DNR does not authorize publicly-funded deer feeding in deer permit areas in moose range, and the agency strongly discourages feeding deer on private land, as well, in the moose range. “The best science we have says it’s not beneficial for moose,” said Rusch.