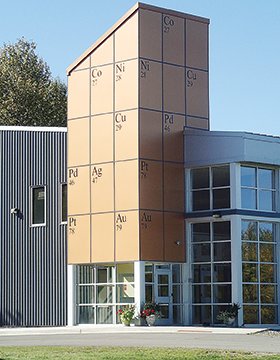 Twin Metals office in Ely. The company's plans for a copper-nickel mine near Ely could be threatened by a proposal to alter the state's non-ferrous mining rules
file photo
Posted Thursday, November 19, 2020 4:02 pm

ELY— The Minnesota Department of Natural Resources and Ely-based Northeastern Minnesotans for Wilderness have reached a stipulation agreement under which the state agency will consider possible changes to non-ferrous mining rules in Minnesota— changes that could include a prohibition on non-ferrous mining in the Rainy River watershed.

The agreement, filed recently in Ramsey County court Wednesday, commits the DNR to undertake “a fair and impartial process to make findings on the adequacy of its non-ferrous mining rules to protect the Boundary Waters and Rainy River Headwaters.” The study, according to the court filing, “will be guided by the science and the evidence, with no predetermined result.”

The development could seriously complicate Twin Metals’ plan for a copper-nickel mine near Ely. The company has now intervened in the case in an effort to block any changes to state rules. “We submitted our comments on the agreement filed by the DNR, and they assured us that they are under consideration,” according to a Twin Metals’ statement.  “[Twin Metals] expects to participate in substantive discussions involving all parties, and we expect that the DNR will defend its own rules and follow the law and the science as this case moves forward.”

The agreement has the potential to eventually settle a lawsuit that NMW filed last June under an obscure law known as the Minnesota Environmental Rights Act, which gives the public the right to challenge actions that have the potential to cause environmental degradation. NMW argued in court that the DNR’s current rules on non-ferrous mining cannot adequately protect pristine downstream waters in the Boundary Waters Canoe Area Wilderness and that only a prohibition on non-ferrous mining in the watershed could achieve the protection afforded the 1.1 million-acre wilderness area under both state and federal law.

"The Boundary Waters is a national treasure and the cornerstone for tens of thousands of Minnesotans whose livelihoods depend upon a healthy and protected wilderness," said Tom Landwehr, Executive Director of the Campaign to Save the Boundary Waters. "State rules and standards are inadequate to protect the Boundary Waters, and this agreement gives us the opportunity to prove it."

The agreement gets NMW past its initial evidentiary hurdle, since the MERA requires that plaintiffs under the act provide evidence of the potential for environmental harm. But Becky Rom, National Chair of the Campaign to Save the Boundary Waters, said the plaintiffs had a powerful case to present, including detailed statements from former Forest Service Chief Tom Tidwell, who rejected the renewal of mineral leases for Twin Metals in 2016, citing “the inherent potential risk” that the proposed mine poses to the Boundary Waters. “Based on information provided by [Twin Metals] to date, existing science, and examination of similar proposals, there is no reason to doubt that the mining operations [Twin Metals] hopes to eventually conduct could result in [acid mine drainage] and concomitant metal leaching both during and after mineral development given the sought after copper-nickel ore is sulfidic,” Tidwell wrote in his 29-page determination on the leases issued four years ago.

Landwehr, who served as DNR Commissioner under the Dayton administration, would also likely have been a strong witness for the plaintiffs. The Campaign also cites peer reviewed scientific papers that document the extreme sensitivity of the Rainy River watershed to downstream pollution due to the region’s complicated hydrogeology.

By stipulating that the plaintiffs have met their initial burden of proof, the DNR potentially avoids further district court proceedings on that question.

A Ramsey County judge must still sign off on the agreement, which would remand the claim to the DNR for what could essentially be a new rule-making process. The agreement avoids further litigation, at least for now, between NMW and the DNR, although a protracted administrative battle could still play out over many months, possibly years.

While the two sides have agreed that the plaintiffs have met their initial burden of evidence, the agreement does not mean that the DNR agrees with NMW or its desire for a prohibition on copper-nickel mining in the Rainy River watershed. “Through this stipulation, the DNR does not take a position on whether the evidence provided by plaintiffs warrants a change to [mining rules] and does not admit that DNR believes [the existing rules] are insufficiently protective,” states the agreement.

If approved by the judge, the DNR would first undertake a public comment period to determine if revisions in the state’s mining rules are warranted. That process would likely begin early next year. Only after reviewing comments and expert submissions would the agency decide on the adequacy of its existing rules. The agreement calls for that decision to be made by Sept. 30, 2021. Any changes to those rules would come with their own public review process.

While the stipulation agreement would remand the issue back to the DNR, the Ramsey County court would retain jurisdiction over the matter and would need to approve any eventual resolution of the case.

The DNR first promulgated the rules at issue, known as Minn. R. 6132.2000, back in the early 1990s to address the siting of non-ferrous metal mines. Those rules already prohibit the siting of such mines in the Boundary Waters, the BWCAW’s mining protection buffer zone, Voyageurs National Park, state Scientific and Natural Areas, state parks, and certain national monuments and wildlife areas. NMW is pushing to add that portion of the Rainy River-Headwaters located just south of the Boundary Waters to that exclusion list, noting that waters from that region flow north into the heart of the wilderness.

The waters in the Boundary Waters are afforded the most stringent water quality protections in the country. The Minnesota Pollution Control Agency has designated its lakes and rivers as Prohibited Outstanding Resource Value Waters, a designation that allows zero degradation.

NMW argues that by allowing mining within the watershed of the wilderness, current non-ferrous mining rules cannot guarantee the water quality standards that the state has established for protection of the Boundary Waters.

“We have these very strong laws, which are designed to keep the upper headwaters of the Rainy River pristine,” said Rom. “It will be interesting to see how you can comply with those laws and policies while allowing copper mining upstream.”

Twin Metals argues that the rules in question are part of a robust environmental review and permitting system in the state and they expressed confidence that the DNR would ultimately opt to uphold them. “Just last year, the Court of Appeals upheld those very rules. Twin Metals Minnesota has filed a motion to dismiss this lawsuit, because we do not believe it is appropriately before the court.” The company said it will continue to pursue environmental review and permitting for its proposed mine as the case moves ahead.