Cleanup underway at Soudan Mine 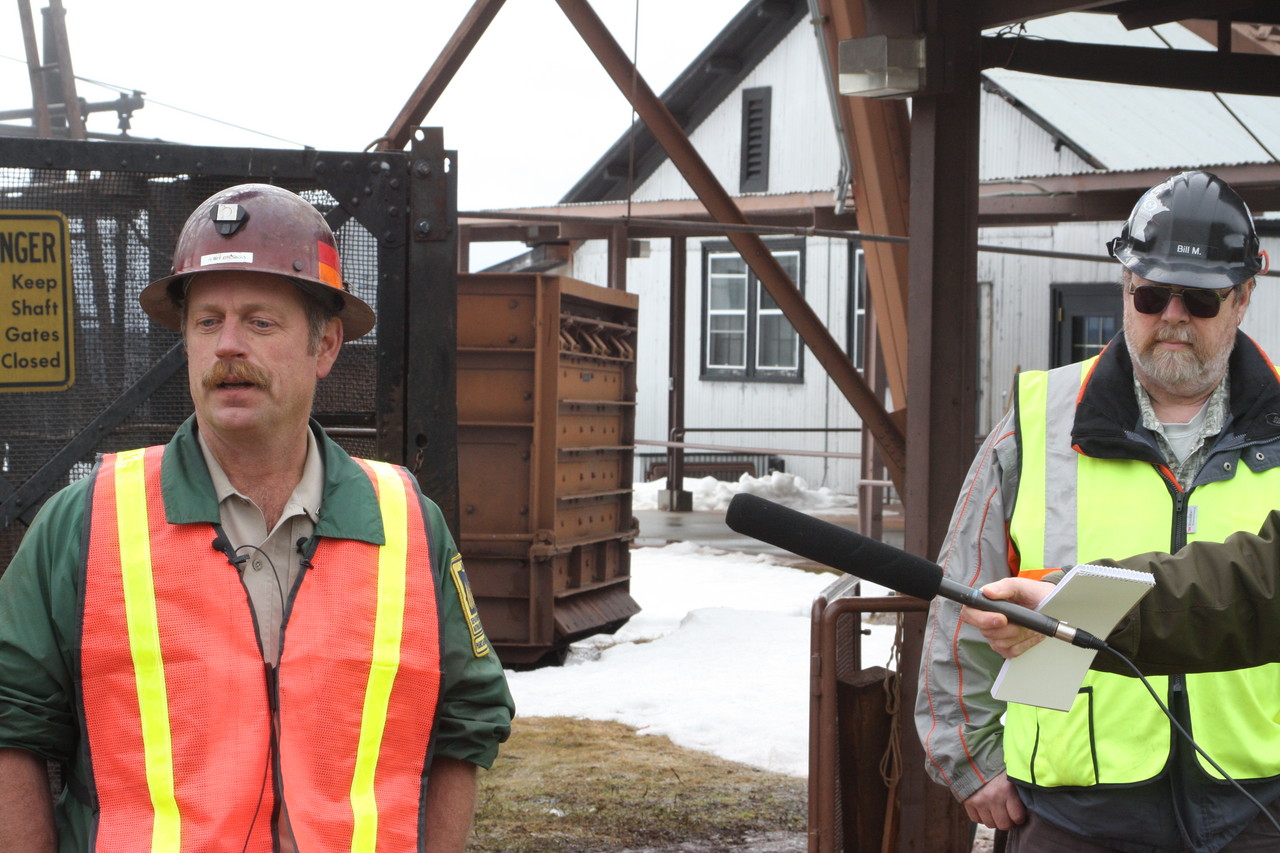 Park Manager Jim Essig answers questions during a press conference held at the park on Monday, while U of M Lab Manager Bill Miller looks on. The park remains closed until cleanup and a safety inspection have been completed.
M. Helmberger
Posted Friday, March 25, 2011 8:51 am

That was Soudan Mine State Park Manager Jim Essig’s assessment of the situation at the park earlier this week, after a fire in the mine’s main shaft threatened major damage to the facility.

Fire crews managed to extinguish the blaze, but for a time after it broke out late Thursday, March 17, the park’s maintenance staff feared the fire could destroy, possibly permanently, the mine’s critical infrastructure, including electrical and water services and the elevator system that provides access to the mine for park workers, scientists, and visitors.

“My main maintenance person came to me at one point and said we might lose this,” Essig acknowledged during a press briefing at the mine on Monday.

But as word of the situation spread, and as park officials reached out for help, offers of assistance and advice came in from literally around the world. Officials from the Minnesota Mine Safety Administration, the Homestake Mine in South Dakota, an elite crew based in the Twin Cities, and mining companies all added expertise. In the end, however, much of the real work was done by the local volunteer firefighters from Breitung Township and the city of Tower.

“It was very heartening to see the outpouring of community support,” said Essig. “There’s a lot of pride in the community about the mine.”

Essig noted that some of the local firefighters have family connections with the mine that go back generations. “Buddy Popesh stood right there working for ten hours Thursday night. His father worked in the mine,” said Essig. Popesh and others were back on Friday and Saturday as well, dousing the mine shaft with aerated foam, which covered the sides almost completely from top to bottom.

The foam mixture was particularly effective, said Essig, because it was thick enough to coat everything as it rolled down along the surfaces of the mine shaft. “The foam smothered the fire,” said Essig, “and kept it from spreading.”

Over the course of three days, the fire crews systematically pumped about 70,000 gallons of foam into the mine. The crews accessed water from a hydrant in Soudan, using a Tower pumper to relay water up the hill to Breitung’s own pumper.

But while the foam was effective, it is now presenting a major clean-up problem. According to Essig, the area around the bottom of the shaft, at the mine’s 27th level, is filled from floor to ceiling with the dense foam.

Clean up crews were busy in the mine all week, working to clear away the immense amounts of foam. Essig said a fine spray of water appears to be the most effective means of dissipating the stuff, but even so it could be a lengthy process. “If anyone knows a good way to get rid of this stuff, call me,” he said.

While the resulting foamy water is being discharged into Soudan’s storm water system, Essig said the foam is biodegradable and shouldn’t pose any environmental concerns.

Meanwhile, officials with the University of Minnesota were confident that the fire had minimal impact on their underground laboratory, although it may be days before they can actually gain access to the facility.

Lab Manager Bill Miller said the lab’s systems appear to have operated as planned during the incident. He noted that when the lab’s fire alarm sounded, it automatically shut off power to the facility and closed ventilation ducts. That, combined with the large and tightly-fitting metal doors at the lab’s entrance, which were also shut at the time, essentially sealed off the facility from the rest of the mine.

“We’re not concerned about the lab,” said Miller. “All the experiments are shut off and they’ll be safe until we’re able to get back in there.”

At this point, said Miller, restoring the mine’s infrastructure to safe operation is their primary concern.

While the lack of electricity in the mine had initially been a worry, since it powers the pumps that keep the mine dewatered, Miller said crews have restored power to pumps on Levels 12 and 22, and that has given officials significantly more time to restore power to pumps on the 27th level. Even without the pumps on those levels, Miller said it would have taken about two weeks for water to reach the level of the lab.

While the temporary shutdown of the lab is an inconvenience, Miller said the timing was somewhat opportune. He noted that problems with the neutrino beam, located at Fermilab, had shut down the beam for repairs several days before the fire, which means the lab’s neutrino oscillation detector was off-line anyway. He said Fermilab expects to have the beam up and running again by late April. “Hopefully, we’ll be back in the lab by then,” he said.

The fire and the temporary capping of the mine shaft, raised some concerns about the health of the thousands of bats that hibernate in the mine. While officials have not yet been able to check on the status of the bats, Essig said there’s no reason to think they were harmed.

He noted that outlying mine shafts and vent holes draw fresh air into the mine, while the main shaft draws air up and out of the mine. That means air movement in the mine should have directed smoke away from hibernating bats. While the decision to cap the main shaft for a time could have pushed smoke and other gases into other parts of the mine, Essig said the main cluster of hibernating bats is located nearly a quarter mile away from the shaft.

“They probably didn’t even know there was a fire,” he said.

Park officials would not speculate on the cause of the fire. Essig said he’s focused now on clean-up and on the significant repairs that will likely be required to get the shaft ready for regular use again. “There are a lot of challenges yet to come, but we’ll get it back,” he said.