LAKE VERMILION – F. Todd Warner basked in the sun as he leaned back on a green vinyl seat in his 1991 Hacker-Craft, chatting amiably with admirers of the sleek watercraft. 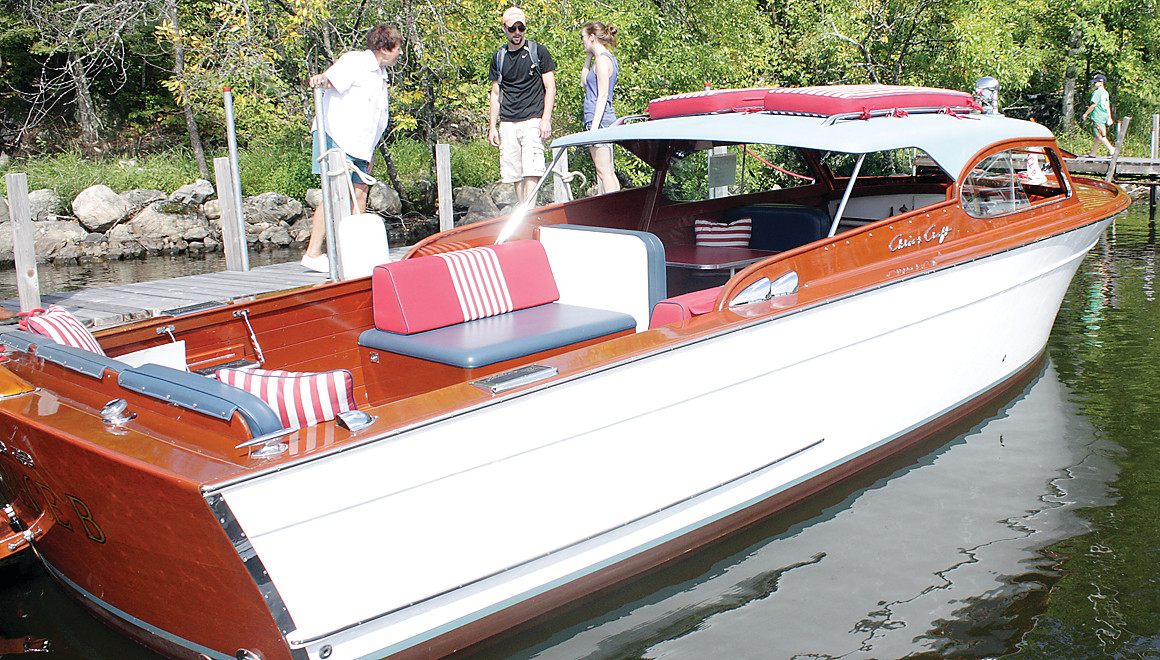 LAKE VERMILION – F. Todd Warner basked in the sun as he leaned back on a green vinyl seat in his 1991 Hacker-Craft, chatting amiably with admirers of the sleek watercraft.

Warner’s boat was part of a fleet of classic boats on display during the 25th annual Lake Vermilion Antique and Classic Boat Show, held on Sunday at The Landing’s marina.

Jeff Stebbins, one of the show’s organizers, estimated that about 1,000 people attended the show. “The docks were always full of spectators,” he said.

The People’s Choice Award, voted on by spectators, went to Sandy Jackson for her 1926 Old Town square-stern canoe dubbed “Suzie Q.” Terry Hurley took home the Skipper’s Choice Award, selected by those exhibiting boats in the show, for his 1947 Chris-Craft named “Flagship.”

Although Chris-Craft boats dominated the boats on display, Warner said some of rarest boats on exhibit were Hacker-Crafts.

The Hacker-Craft plant was founded by designer John Ludwig Hacker in Detroit, Mich., in 1911.

“So he had 50 great years of boat design and he was known as the Steinway of runabouts,” said Warner.

Warner, a self-described Hacker fan, brought an impressive example of Hacker’s work to the boat show. His boat, named “Encore,” based on a modified version of Hacker’s design, stretches more than 30 feet and features three cockpits. The watercraft is powered by a 454, 300-horsepower Crusader engine, “so it’s powerful.”

Other boats featured at Sunday’s show included the 1952 Chris-Craft featured in the film “On Golden Pond,” and a 17-foot wooden row troller built by Winchester Boat Works, located in Presque Isle, Wis.

Adam Jahnke, general manager for Winchester Boat Works, noted that the boat’s design was created by Willi Kruschinski, a master boat-builder who was born in Hamburg, Germany. Kuschinski built the boats in his garage and his plans and inventory were purchased by Winchester Boat Works about two years ago.

“Some of Kruschin-ski’s work is in the Smithsonian,” said Jahnke.

The boat’s rich finish extends to every detail, including brass fish fittings to hold the benches and a brass muskie, dubbed “Murphy,” on the tip of the boat’s bow. The muskie is based on one of the many wooden lures that Kruschinski carved.

The boat’s design is also functional. The unique hull shape is drawn from the design of the traditional sailing schooner. At the waterline, the shape of the double-ended hull provides additional thrust to each oar stroke, explained Jahnke, who added the oars’ spoon shape also is key.

There were other options at the boat show for those who prefer to leave the horsepower to an engine.

One of the show’s sponsors, Premier Pontoons, had some of their boats on display including a top-of-the-line luxury model. The Intrigue pontoon measured 25 feet long and 8.5 feet wide and was powered by a 300 horsepower outboard. With that size outboard, the boat could reach speeds of up to 45 miles per hour.

“We’re made here in Minnesota and have several patents on different parts of our boat,” said Elizabeth Lidberg, an executive assistant in sales for Premier. “The PTX system is probably what makes us perform better.. We get up on plane like a ski boat, and we can have more people on our boat and have more power.”

Premier Pontoons is located in Wyoming, Minn., and its boats are for sale at Timbuktu Marine in Cook.