North Woods program back in session

North Woods program back in session 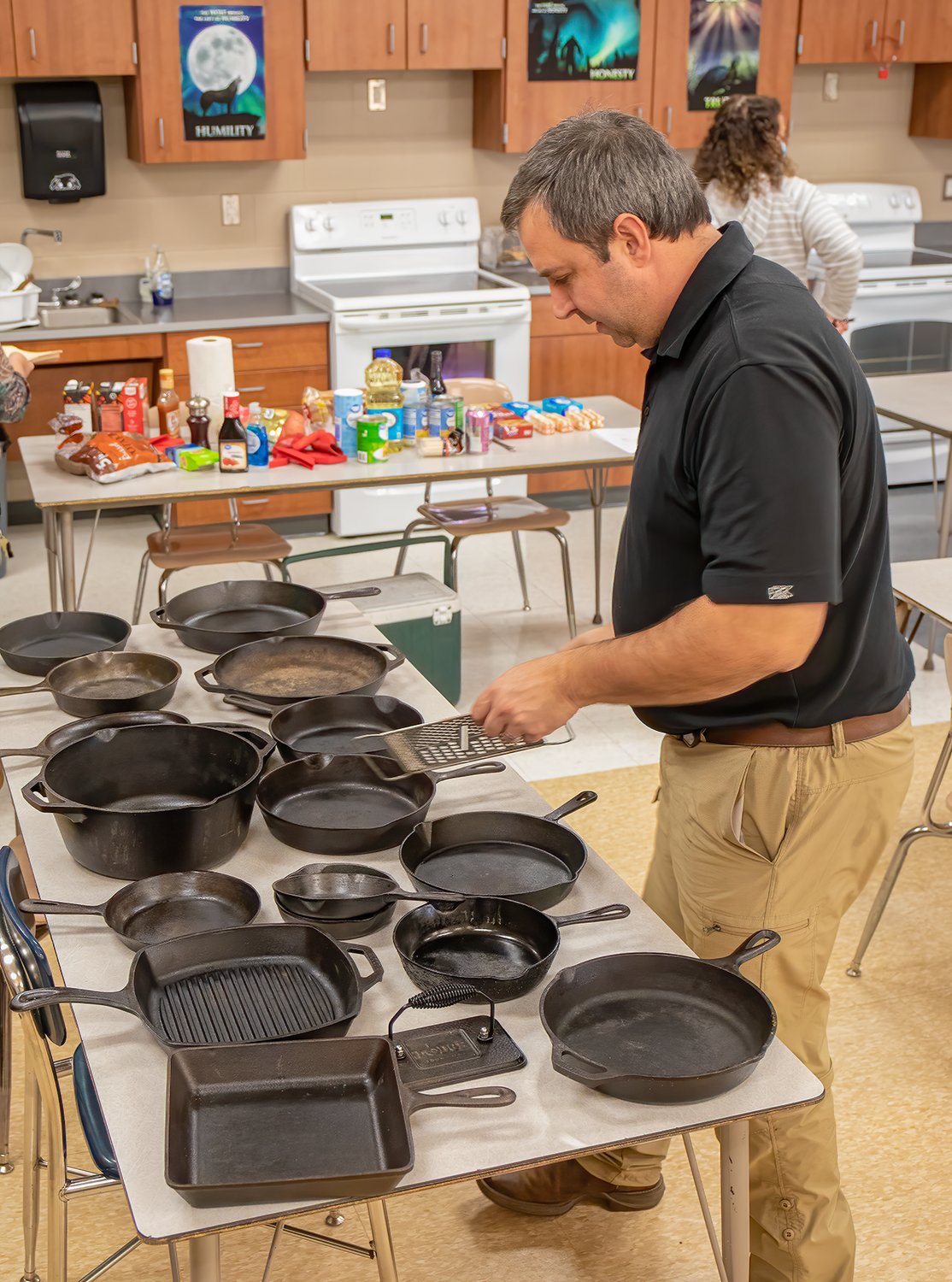 Steve Kajala prepares a sample of his cast iron cookware collection prior to his cooking class.
D. Colburn 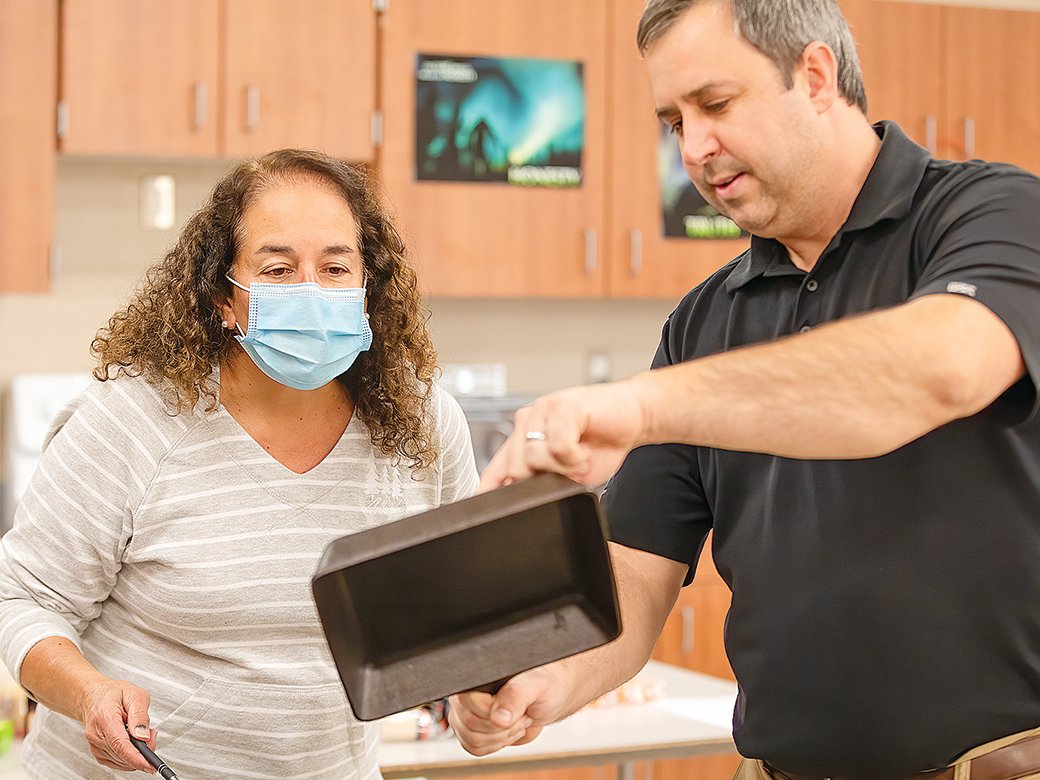 Instructor Steve Kajala explains the meaning of a mark on a cast iron pan to student Cindy Jones.
D. Colburn 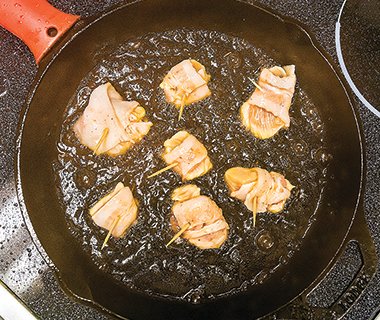 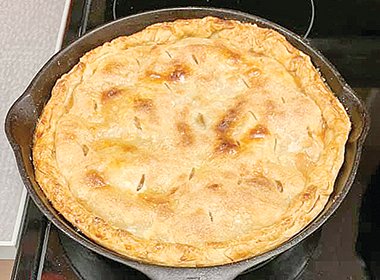 Even homemade apple pie can be prepared in a cast iron pan.
S. Kajala
Previous Next
Posted Wednesday, September 30, 2020 5:01 pm

FIELD TWP- Steve Kajala, of Cook, doesn’t claim his culinary talents rank with the likes of popular Food Network Iron Chefs Bobby Flay or Mario Batali.
But Kajala’s love and knack for cast iron cooking was on full display Tuesday as he helped the North Woods Community Education program get back on track with in-person classes during a cooking fest at the school.
Learning began before the class officially started, as upon arrival each of the five students was immediately curious and began asking questions about the array of 14 cast iron pans of varying shapes and sizes that Kajala had spread out on a table.
After talking and answering questions for nearly 40 minutes about the nuances of selecting, seasoning, and using cast iron cookware, Kajala got students involved in cooking an extensive list of items he had chosen. While cooking is serious business for Kajala, he balances that with a sense of humor.
“It’s possible we may set the smoke alarm off,” he said.
The former home economics classroom hasn’t been used as such in several years, and Kajala had to climb behind two of the four electric ranges to plug them in, but it wasn’t long before the inviting aroma of sizzling onions for French onion gratinee soup filled the air.
Cast-iron-cooked Hawaiian chicken rumaki, petite grilled cheese sandwiches, roasted garlic, cheesy corn casserole, steakhouse hash browns, homemade apple pie, and fudge brownies all complemented the main entrée, New York strip steaks.
“It’s hard to explain, but a steak done in a cast iron pan is beyond what you can do on a grill,” Kajala said. “You get that perfect sear on there that locks in the flavors.” Ribeyes are another cut Kajala said is ideal for cast iron.
Cooking has been largely a self-taught skill for Kajala, although growing up he sometimes cooked with one of two grandmothers he described as “great cooks.” But living independently when going to college and after returning home, Kajala decided he needed to master cooking.
“You can cook food, and you may as well try to cook good food,” he said. “I kind of took it from there and got into collecting cast iron and trying different recipes, just trying to become a better cook. I would like to have a meal that’s as good or better than you can get at a restaurant for less cost.”
As an avid outdoorsman, Kajala said he’s also gotten plenty of cooking practice on hunting and fishing excursions with his buddies.
“There are a bunch of guys and half of them can’t cook toast,” he laughed. “You just end up being the cook, which gets you out of things like doing dishes.”
Kajala said he doesn’t buy new expensive cast iron cookware, preferring used pieces he picks up on the cheap or is given and that he can rehabilitate. Cast iron has numerous advantages over newer nonstick-coated pans, one of which is longevity.
“You actually spend less than you would on a high-dollar pan and get something that’s going to last for a lifetime,” he said. “I know a few of these pans belonged to people older than my grandparents.”
Tuesday’s class was Kajala’s first foray into teaching cooking, and he’s already looking at an encore. He’s been asked to consider teaching a class next semester about another favorite, pizza.
North Woods School offers a range of online and in-person community education classes, with online registration available. The full ISD 2142 Community Education catalog with course listings and contact information is available online at the school district’s website.