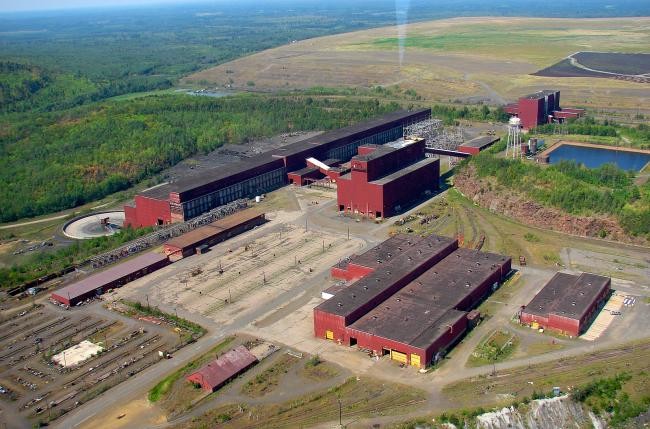 A questionable appraisal used for a land exchange between the U.S. Forest Service and PolyMet has prompted a lawsuit that could significantly delay progress on PolyMet's proposed copper-nickel mine near Hoyt Lakes.
courtesy PolyMet Mining
Posted Wednesday, March 15, 2017 4:24 pm

REGIONAL—Duluth-based Water Legacy is asking a federal district court in Minneapolis to impose a preliminary injunction to block completion of a pending land exchange between PolyMet Mining and the U.S. Forest Service while their lawsuit challenging the largest federal land exchange in Minnesota history moves forward.

Water Legacy filed suit against the exchange on Jan. 30, but hadn’t immediately sought an injunction. It filed that motion with the federal district court on Feb. 23.

Meanwhile, PolyMet Mining has intervened in the case and filed a motion on Friday, March 10, asking the court to dismiss the case for lack of standing, arguing that Water Legacy has failed to show that its members would be harmed should the land exchange go forward. The issue of standing could be PolyMet’s best bet for derailing Water Legacy’s claim that the exchange, approved by the Forest Service on Jan. 9, constitutes a “sweetheart deal” that gives federal lands away for pennies on the dollar.

A review of the appraisal upon which the land exchange is based suggests the case, should it proceed on the merits, could pose serious problems for the Forest Service, and more significantly for PolyMet, as it pursues its goal of opening the state’s first copper-nickel mine.

The Timberjay had previously sought to obtain the federal land exchange appraisal through a Freedom of Information Act request to the Forest Service, but the agency has, to date, refused to release the document to this newspaper.

At issue, according to Water Legacy legal counsel Paula Maccabee, is whether the Forest Service violated federal law by significantly undervaluing the federal lands it wants to exchange with PolyMet. The deal is intended to address a legal conflict between PolyMet’s plan to build an open pit mine on the site, and a federal law known as the Weeks Act which prohibits surface mining on federal lands, such as those at issue, that were acquired under authority of the act.

Under the deal approved earlier this year, the two parties would exchange roughly equal acreage. PolyMet will provide 6,690 acres the company purchased from private landowners in other parts of the Superior National Forest for the 6,650 acres it needs for its proposed NorthMet Mine. Because the valuations were not exactly identical, the federal government will also pay PolyMet $425,000 in cash as part of the deal.

It would seem relatively straightforward, except for a provision in the Uniform Standards of Professional Appraisal Practice, or USPAP, that requires that a property’s market value be determined by its “highest and best use.” All certified appraisers are required to base their work on these standards, and federal law requires it for federal appraisals as well.

That concept of “highest and best use” is one reason that an acre of land in downtown Minneapolis, for example, would typically be worth far more in an appraisal than a similar acre of swamp in northeastern Minnesota. Or, as Maccabee argues, an acre sitting atop known, valuable minerals is worth more than that same acre of timberland.

In this instance, PolyMet is giving the Forest Service scattered timberland, roughly acre-for acre, for valuable surface rights sitting atop what the company contends is a multi-billion dollar deposit of copper-nickel and precious metals. Had Compass Land Consultants, the Wisconsin-based firm that conducted the appraisal, valued the Forest Service acreage as mineland, rather than timberland, PolyMet would almost certainly have needed to provide several acres of timberland for each acre of mineland it acquired from the Forest Service. And that’s exactly what should have happened, according to Maccabee.

That didn’t happen because the appraiser concluded that surface mining at the site is not “financially feasible.”

That’s a conclusion that might surprise most supporters of PolyMet’s planned mining operation, but it proved a convenient, if questionable, conclusion for purposes of the appraisal. As Compass Land Consultants appraiser William Steigerwaldt explains in his 45-page appraisal document, appraisers use a four-part test to determine what kind of activity would constitute a property’s highest and best use. Those tests include:

• Is it legally permissible?

• Is it physically possible?

• Is it financially feasible?

• Is it maximally productive?

Steigerwaldt concluded that mining met the highest and best use test for three of the four questions, but failed to meet the test for financial feasibility. As Steigerwaldt notes, the surface rights at the site are generally severed, meaning the owner of the surface does not necessarily control the mineral rights below. “Without controlling both the surface and mineral estate, a mining use does not appear feasible,” concludes Steigerwaldt, overlooking the fact that the proposed land exchange is being undertaken to remedy that exact situation, as well as address the prohibition on surface mining in the Weeks Act. In this instance, PolyMet has rights to most of the minerals beneath the federal lands.

Indeed, while the Forest Service may have used the land for timber management, wildlife habitat, and recreation, PolyMet’s proposal to mine copper-nickel at the site should have been considered in the valuation. That’s according to the Uniform Appraisal Standards for Federal Land Acquisitions (UASFLA), commonly known as the “Yellow Book” to those who work in the area of federal appraisals, which states “a nonfederal party’s proposed use, if reasonably probable, must be analyzed as a part of the highest and best use determination.”

In this instance, the use of the property in question for mining is not just reasonably probable, but has been the subject of more than a decade of investment, including environmental review, by PolyMet. In approving the land exchange, the Forest Service issued what’s called a Record of Decision, which must establish the “purpose and need” for the exchange. In so doing, the Forest Service indicated that the public purpose for the exchange is the creation of the mine and the accompanying jobs and economic activity it would provide.

That basic contradiction amounts to a fatal flaw in the evaluation, according to Maccabee, since it sets the highest and best use of the site as timber management when all parties involved recognize that the exchange is being undertaken to facilitate a new mine. And that anticipated use meant that the appraiser should have used comparable sales of mineland, rather than large tracts of timberland, in determining a proper market value.

In fact, Steigerwaldt’s appraisal does list some comparable sales of lands purchased by mining companies in northeastern Minnesota, and he found that those lands sold for considerably more than the $550 an acre he determined as the market price for the Forest Service land sought by PolyMet. Over the course of the past several years, mining companies have purchased tens of thousands of acres in the region, mostly to acquire private lands for potential trade for public lands or for wetlands replacement. The companies, which include PolyMet, Franconia, Twin Metals, Duluth Metals, and others, paid an average of $1,645 an acre for that land, most of which was not known to hold valuable minerals. PolyMet recorded the best deal of the bunch in 2011, acquiring 5,205 acres of mostly swamp in St. Louis County from the Leonard Land Company, for $624 an acre. Twin Metals, by contrast, paid $2,500 an acre to Marlow Timberland for 1,320 acres in Lake County.

Where minerals are known to exist, however, mining companies tend to pay considerably more.

A review of comparable sales by Patchin Messner Dodd & Brumm, a Burnsville-based appraisal firm, noted that purchases of surface lands over a known deposit of high-grade copper in Aitkin County drew even higher sale prices. Water Legacy hired Patchin Messner Dodd & Brumm to provide an independent review of Steigerwaldt’s appraisal, and the company examined purchases by Kennecott Mining between 2012 and 2014. Kennecott is currently working to develop a high-grade copper mine near Tamarack, near the Aitkin-Carlton county line.

After reviewing the appraisal conducted by Steigerwaldt, company partner Jason Messner stated his belief that Steigerwaldt’s estimated market value of $550 an acre is “not reasonable or supported by the market, and not in conformity with the UASFLA.” Messner concluded: “By basically ignoring the conclusion that the property may have significant value for copper, nickel, platinum group metals and other minerals, the appraiser fails to properly analyze the highest and best use of the property as a whole.”

Appraisers can and do reach significantly different conclusions when it comes to valuing real estate. And that’s why parties will often seek more than one appraisal, according to Steve Abrahamson, an appraiser with Vermilion Land Office in Tower. “No matter what, it would be prudent to have more than one appraisal, particularly when it involves a significant and complicated property and there’s a significant public interest at stake,” he said.

Abrahamson said appraisals can vary widely. “Sometimes by millions of dollars,” he said. That’s why multiple appraisals are not unusual. “Sometimes both parties will get one, and then they’ll get a third to try to sort out major differences. To me, it would be prudent to have more than one appraisal, so everyone feels there’s been fair play,” he added.

The Water Legacy lawsuit is unusual, since unlike most other such suits from environmental organizations, this one is based primarily on taxpayer equity and compliance with federal laws pertaining to land appraisals, rather than environmental laws and impacts. And Maccabee notes that her lawsuit won’t stop the mine from proceeding.

“It just says they can’t violate federal law in order to acquire the land,” she said. As currently devised, Maccabee said, the exchange amounts to a significant taxpayer subsidy of a foreign corporation.

While the lawsuit might not stop the mine, should Water Legacy prevail, the setback would cost PolyMet both time and money. Under federal land exchange rules, the company can’t simply offer to pay more for the land. It would have to begin the process of buying up more land, possibly thousands or even tens of thousands of additional acres. Then, the company and the Forest Service would have to go through a lengthy appraisal and an entirely new decision process by the Forest Service. As PolyMet argued in its motion to intervene, filed Feb. 27, “PolyMet would not only be prevented from acquiring surface title to valuable lands, it would face significant costs from delay in constructing its proposed mine.” If the experience for the first go-round is any indication, it could take years.

It may not take that long to get a sense of where the case is headed. The judge, Joan Ericksen, a George W. Bush appointee, will likely rule on the motion for an injunction in a matter of weeks. If she grants the injunction, it’s a strong indication she sees Maccabee as likely to prevail.

Maccabee will first need to fend off PolyMet’s motion to dismiss on standing. The motion contends that the land in question is so remote from public access, that Water Legacy’s members are unlikely to ever access the property or be legally harmed should the exchange go forward. In a statement, Maccabee expressed confidence that Water Legacy will meet the test for standing in the case.