GREENWOOD TWP- “What exactly is a sauna?”This was the first question that Lake Vermilion summer resident and sauna expert Glenn Auerbach posed at an informal gathering at Gruben’s … 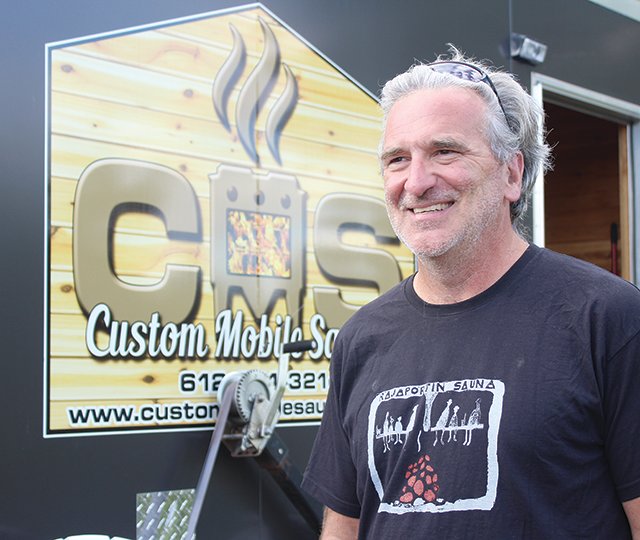 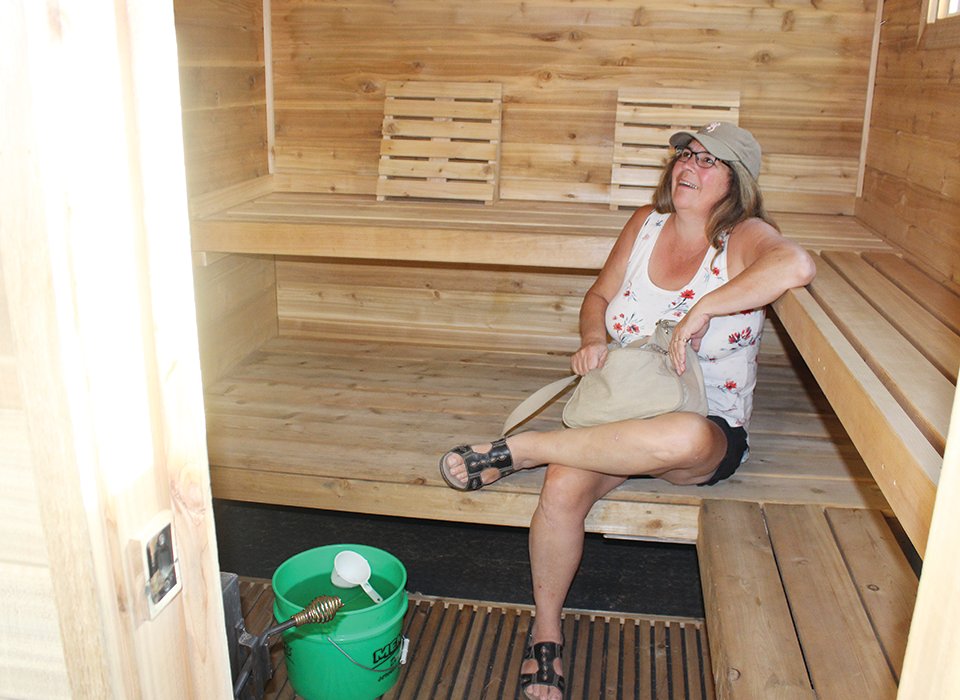 Mary Ann Wycoff, and her husband Shannon attended a recent Sauna Talk event at Gruben’s Marina on Lake Vermilion to get ideas for a mobile sauna unit.

GREENWOOD TWP- “What exactly is a sauna?”
This was the first question that Lake Vermilion summer resident and sauna expert Glenn Auerbach posed at an informal gathering at Gruben’s Marina, on Lake Vermilion, on Aug. 31. Auerbach met with a little over a dozen interested Lake Vermilion residents, giving them the latest knowledge gleaned from his recent trip to Finland, where he took a sauna more than 50 times over the course of his 12-day trip.
A mobile sauna (built on a wheeled trailer) from Custom Mobile Saunas was set up lakeside and was piping hot and ready for anyone wanting to give it a try.
Sauna is both a noun, describing the building itself, and a verb, describing the action of heating up one’s body in a very hot room.
The definition of sauna, Auerbach said, is pretty simple. A sauna is a room which his heated by a stove that is topped with rocks and must also include water that is poured on the rocks to create steam. The stove can be electric (most common ,even in Finland), or wood-fired. The thermal mass of the rocks, he explained, is integral to the sauna experience, because of the quality of the heat they give off.
Dense, round, igneous rocks, with sizes mixed from golf ball to softball sizes, create the smoothest heat, he said. The dark grey and black diabase rocks found along the shore of Lake Superior also make great sauna rocks, he said.
And while sauna is synonymous with heat, the cooling off is just as important, he stressed. Whether this means jumping into a nearby lake, dumping cold water over one’s head, or cooling off with an outdoor or indoor shower, it is the heating and cooling cycles which make sauna a unique physical and mental experience.
“Sauna is a place,” he said. “And it is a thing you do.”
The best saunas, Auerbach said, are places that are separate from one’s regular busy life.
While in Finland, Auerbach had the chance to meet with medical researchers who have been studying the positive health benefits of regular sauna. A recently-completed study of 1,200 men that lasted 25 years showed marked benefits in those who took sauna 4-7 times a week, including reduced cardiovascular disease, lower blood pressure, and lower levels of Alzheimer’s and dementia.
“The more frequent the saunas, the lower the risks,” he said. The sauna-taking experiences included at least two cycles of heating up/cooling down.

How to enjoy a sauna
Hydration, Auerbach stressed, is essential to a positive sauna experience. He recommended drinking at least 20 ounces of water before taking a sauna, and then drinking water during and after.
“The water in Helsinki has more minerals than our tap water,” he said, noting he didn’t feel nearly as tired post-sauna while in Finland. He is now experimenting with adding some minerals to his pre-sauna water to see if that makes a difference.
Auerbach likes his sauna heated to between 180 and 200 degrees, with about 10 minutes in the heat to get his core temperature raised, then as long as it takes outdoors to cool his core back down. Then repeat at least two more times.
“There are only a few rules,” he said. “If you get too hot, go outside, and if you get too cold, go back in.” He said top or low bench was just a personal preference.
He recommended not taking sauna with a full stomach or if really hungry.
“But there is no right or wrong way,” he said.
Auerbach and his wife live in the Twin Cities but spend most of the summer at their cabin on Lake Vermilion, which of course has a lakeside sauna. At their city house, they have a backyard sauna with an outdoor shower which they use year-round.
Auerbach is also active in the 612 Sauna Society, a Twin Cities group that uses mobile sauna units to introduce people to the activity.
He said there is a growing interest in sauna among young adults in Finland also, with bars and restaurants bringing in mobile saunas, or building their own, and attracting large crowds.
“There are about 185,000 lakes in Finland,” he said, “and all of them have saunas along the shore.”

Build your own
Auerbach has written a book about building your own sauna, which is available on his website at www.saunatimes.com. He also produces a sauna blog, called Sauna Talk. The website is full of sauna-building and sauna-taking tips.
He also partnered with Eric Bongard, owner of Custom Mobile Saunas, helping design a very functional, and portable, sauna on a trailer, that features a Lamppa Kuuma sauna stove.
“Kuuma means hot in Finnish,” he said. “I am a big fan. It really harnesses the energy of the wood. It is so efficient. You only need a small bundle of wood to get the sauna very hot.”