No running shoes required for most marathon activities this weekend

ELY – This weekend nearly 600 athletes will arrive in Ely to run… and run. Roughly 400 of them will take part in the 13.1 mile-long Boundary Waters Bank half-marathon, while close to 200 …

No running shoes required for most marathon activities this weekend 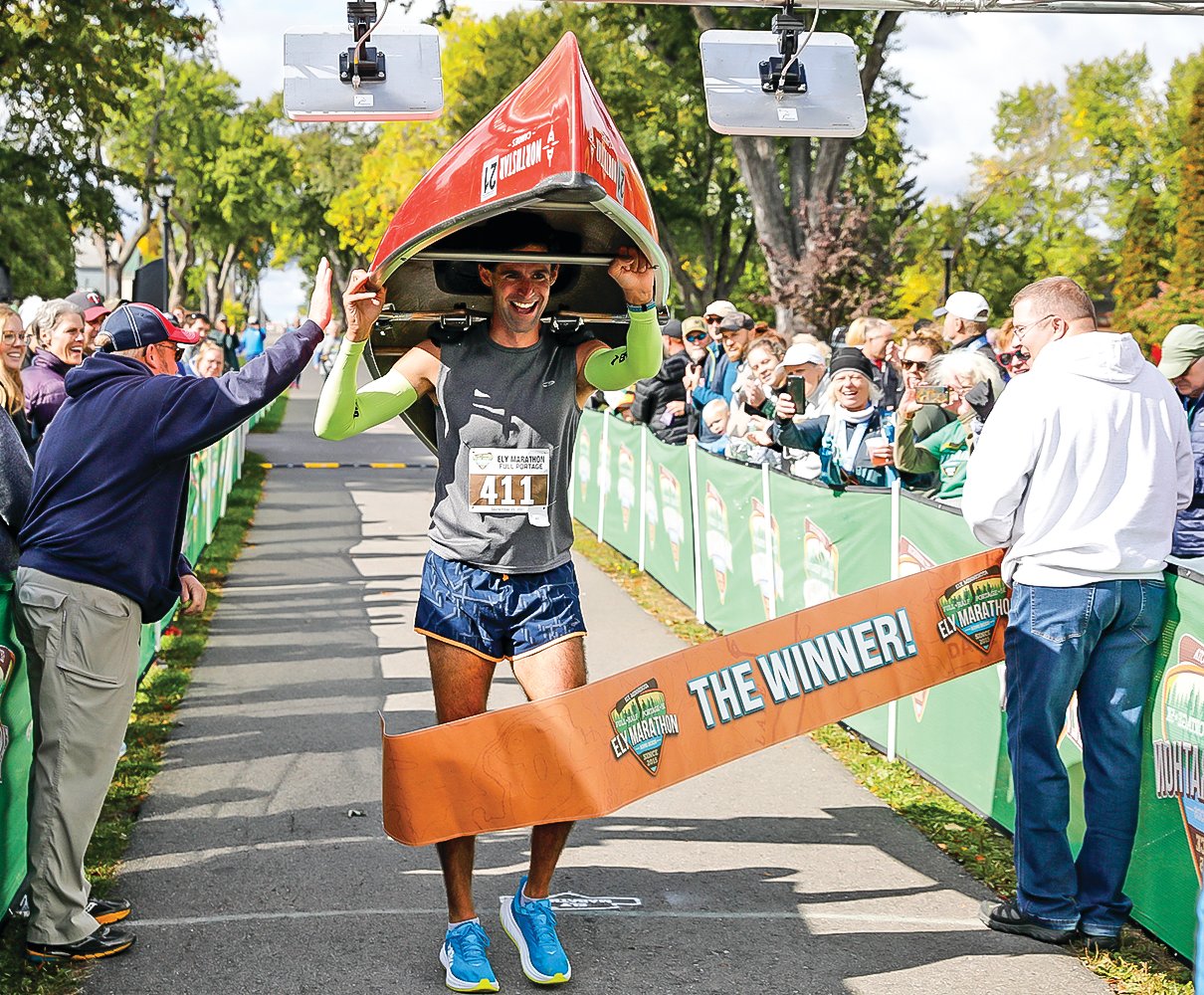 Left: Last year’s canoe portage marathon winner was looking good as he came across the finish line in Whiteside Park amidst a large crowd of cheering fans. It all kicks off again on Saturday with the seventh running of the Ely Marathon.
file photo
Posted Wednesday, September 21, 2022 5:29 pm

ELY – This weekend nearly 600 athletes will arrive in Ely to run… and run. Roughly 400 of them will take part in the 13.1 mile-long Boundary Waters Bank half-marathon, while close to 200 will be running all 26.2 miles of the Ely marathon.
As if running a half or full marathon isn’t challenge enough, more than 20 racers will be attempting to do it Ely style— carrying canoes. For those not schooled in the language of the portage trail, that’s 4,195-rods for the half-marathon and an impressive 8,390-rod portage for the marathon. Anyone who’s ever portaged a canoe even a handful of rods knows that every rod counts.
The marathon, now in its seventh year, has grown remarkably in recent years, in both participants and associated events. In addition to those running the half and full marathon, 100 kids ages 12 and under are signed up to run the third Annual Dorothy Molter Rootbeer Run. Racers who have completed 25 miles running on their own any time prior to the race can run the last 1.2 miles to complete their full marathon accomplishment on race day.
Of those competing in this year’s race, one racer of note is not currently signed up to compete – owner of the Guinness Book of World Records mark, Anthony Peter. In 2019, Peter set the original course record for portaging a canoe in five hours and one second. He then went on to smash that record in 2021 when he set a new course record with a time of 4:23:20.
His absence this year may leave room for a new champion to emerge; however, late registration is available. Race organizer Wendy Lindsay said that last-minute race registration would be available at packet pickup at Whiteside Park at noon on Friday. In the wake of the COVID pandemic, Lindsay noted that many races have seen a surge in last-minute sign-ups.
An event the size of the Ely Marathon and Boundary Waters Bank half marathon is one that relies not only on the runners who compete, but on the many people who volunteer to make the whole weekend a success. Lindsay noted that there are more than 50 area organizations and roughly 400 volunteers helping to put on the weekend’s events.
In addition to three races on Saturday, there is the Northern Lights 5K Glow Run at 7 p.m. Friday night.
For those who’d rather leave their running shoes at home, they can still join in the weekend fun with plenty of live music. Friday night the Thundermugs will perform in Whiteside Park from 6-9 p.m. Rhino is Saturday’s featured act at Whiteside Park during and after the race, from 10 a.m. – 2 p.m., and Van and the Free Candies are set to perform in Winton at Mile 18 of the full marathon.
Spectators and racers will be able to enjoy a wide selection of food trucks and refreshments on both Friday and Saturday.
Lindsay said she hopes people will come to check out the marathon on race day, particularly if they never have before.
“This is kind of a rare event,” she said. “To be at the finish line and experience that. It’s just an energy that you don’t get anywhere else.”