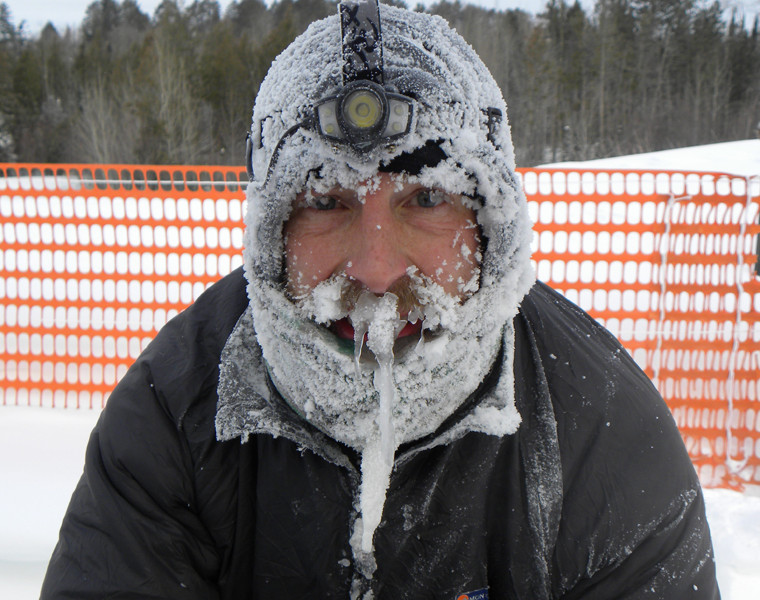 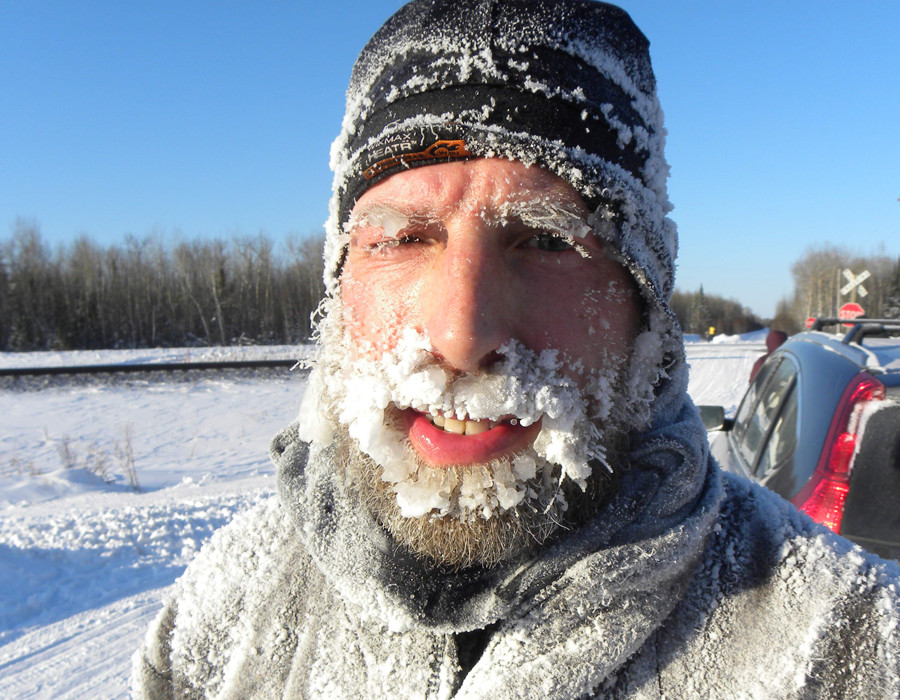 Minnesotan David Gray, smiles through an icy beard during a quick breather on the way. Gray finished fourth in the race, with a time of 25 hours, 57 minutes.
J. Gray 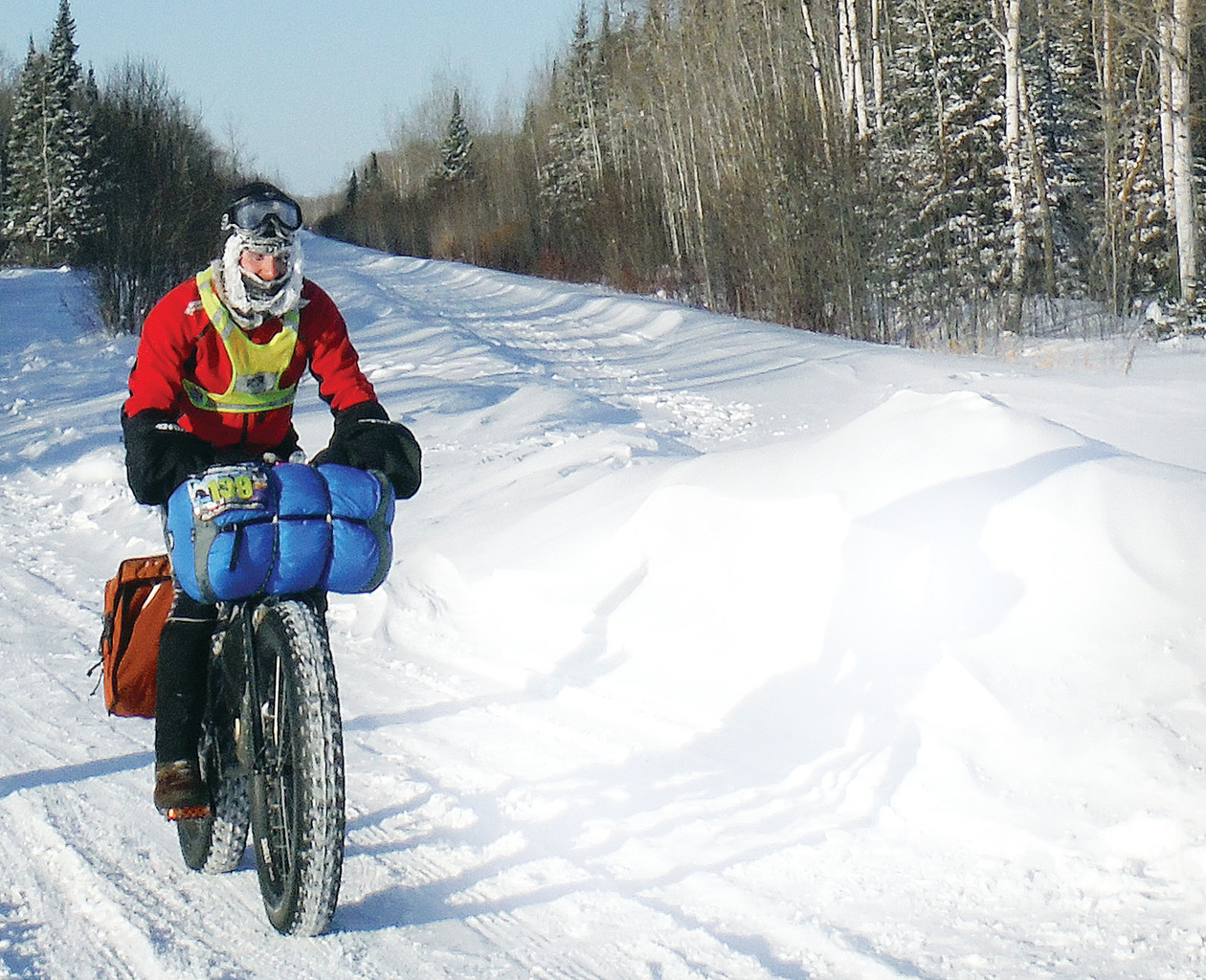 A participant in the Arrowhead Ultra 135 makes his way along the Arrowhead Snowmobile Trail in far northern St. Louis County. Racers faced air temperatures as low as minus-30, with windchills of minus-45 degrees.
F. McLin
Previous Next
Posted Wednesday, January 29, 2014 4:21 pm

REGIONAL—Extreme racers converged on the North Country this week for the 10th annual running of a marathon event that has developed a worldwide reputation as one of the most grueling races on the planet.

It’s called the Arrowhead Ultra 135, and the hardcore racers who take part in the 135-mile race, that follows the Arrowhead Snowmobile Trail from International Falls to Fortune Bay Resort Casino on Lake Vermilion, seek to test themselves against the terrain, the solitude, and the cold. And cold it was, with temperatures dipping as low as minus-30 degrees and windchill readings in the minus-45-50 degree range.

The race began early Monday, as racers, who compete on foot, bike, or ski, left I-Falls with temperatures hovering near minus-30, and with a stiff wind from the northwest. By evening, dozens of the roughly 150 participants had dropped out and by midday Tuesday, the list of dropouts had grown long. It’s a test of man, and even a few women, against Mother Nature, and this year nature came out on top in most cases.

Race organizers say it’s not unusual to see three-quarters of the field fail to finish within the 60-hour race window, and that’s particularly true when conditions are as harsh as racers experienced this year. In the end, only about 30 percent of racers finished the race.

Among those who did was Christopher Tassava, of Northfield, Minn., a first-time racer who completed the course on his fat-tired mountain bike, and finished in seventh place. “I’ve done a lot of tough, athletic stuff over the years,” said Tassava. “But this was the toughest of all, and the most satisfying to finish. It was a peak experience.”

For Tassava, the intense cold was the biggest challenge. “Everything got numb,” he said. The shocking build-up of frost around his face proved another problem. “I had so much ice on my beard I couldn’t get food in my mouth,” he said.

For many of the racers, the exertion under such extreme conditions can play tricks with the mind, especially during the long hours of darkness, since many of the elite competitors push straight through, without sleep. “You get so depleted,” said Tassava, that you start seeing things. “I kept imagining every tree was a sign and that I could see the next checkpoint just up ahead.”

While many of the racers make the push in extreme solitude, Tassava said he met up with another racer along the trail, about 2 a.m. on Tuesday. He said the two of them rode together for almost four hours. “That was such a relief,” he said. “It was good to have someone else there, to help keep away the crazy.”

But Ken Zylstra, of Prior Lake, Minn., might have been hoping he was seeing things, when two wolves on the trail spooked as he came over a rise south of Melgeorge’s Resort. “They split up and started flanking me as I rode,” said Zylstra. Later, as he and another racer neared the finish line, he had a second encounter with a wolf that was running down the trail right towards him. He finally spoke to his fellow rider as the wolf neared, which alerted the wolf to their presence. “He just looked at us,” said Zylstra. “Then he ran back a little ways and looked at us again before disappearing into the woods.” For Zylstra, it was his fifth time competing in the Arrowhead Ultra, and the fifth time he’d finished.

Finishing was the exception, of course, during this year’s running of the marathon. As of Wednesday, about 65 percent of bikers had dropped and the finish rate for runners looked to be just over 25 percent. Of the three skiers who started the race, only one was still on the course.

“There was a lot of frostbite out there,” said Logan Polsufs, of Oshkosh, Wis., who dropped from the race about 3:30 a.m. Tuesday morning near the Sheep Ranch Road, north of Orr.

Polsufs, who was a runner, said the intense cold presented too many difficulties to overcome. He had brought two thermoses with him to keep his water from freezing, but the caps to both of them froze so hard he couldn’t remove them. “I didn’t have any water to drink for about seven hours,” he said. “I started getting dehydrated and that just makes you more cold.”

Polsufs said keeping his hands warm was the biggest challenge, especially as sweat tended to make things damp. He said his gloves ended up frozen inside and out, and it left him with mild frostbite on most of his fingers.

Many of the racers also had trouble with headlamps, which quickly faded in the cold.

So why do the racers subject themselves to such conditions? “That goes through your mind quite a bit,” said Polsufs. “I’m not really sure why.” But he said he plans to be back next year, with a new plan and renewed enthusiasm to overcome the worst that the North Country can deliver.