Phantom of the Alley

Things are expected to go bump in the night at a bowling alley. That’s what they’re built for.

But at the Ely Bowling Center recently, “things” didn’t go bump in the night so much as …

Phantom of the Alley 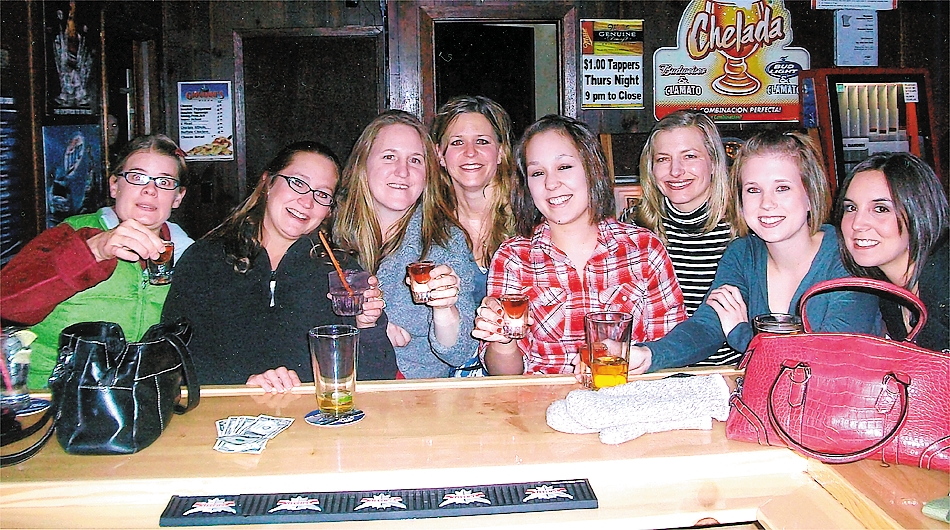 The original photo of the group of women. The apparition can be seen just above the head of the woman on the far left. 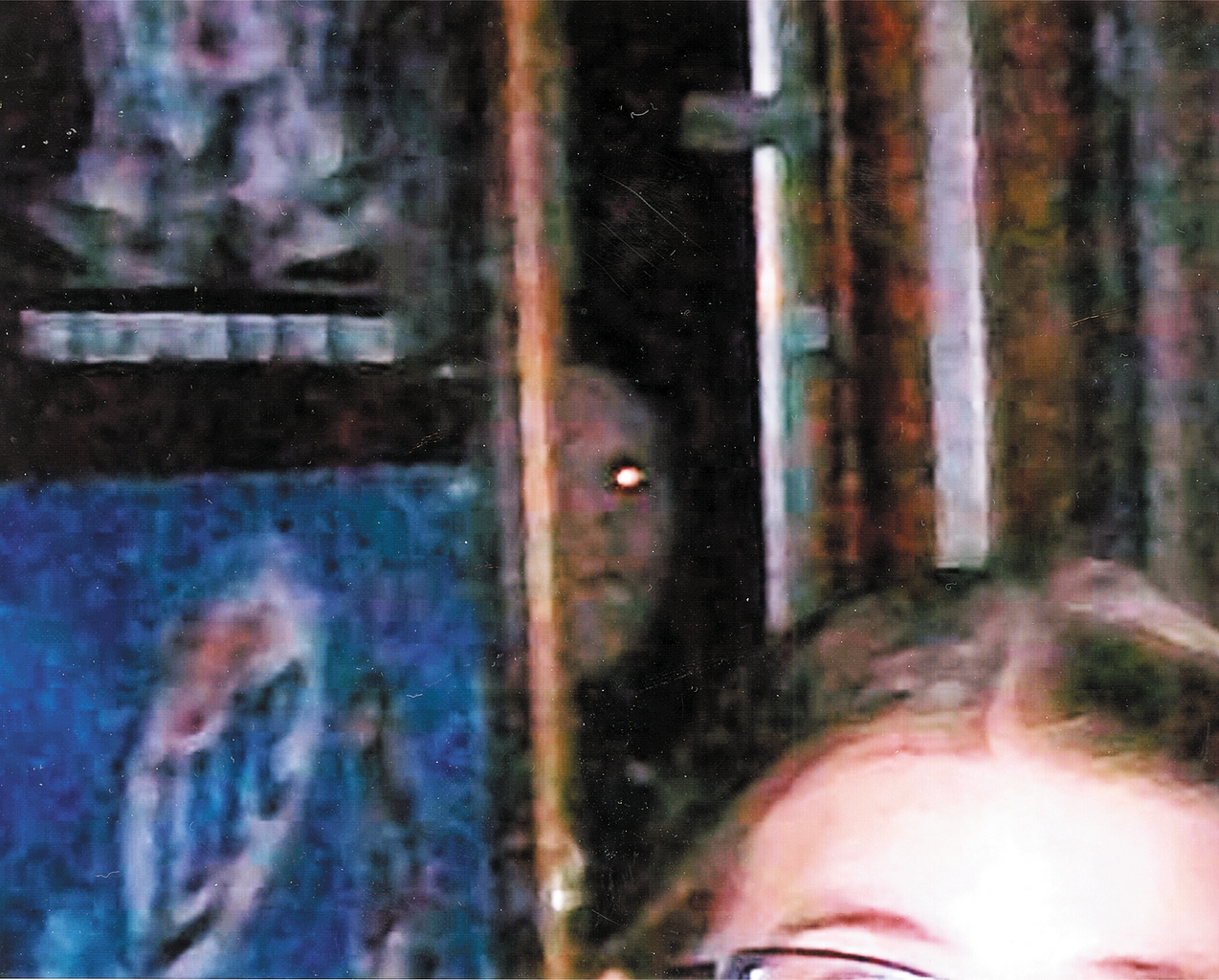 An enlargement of the photo better shows the ghostly face that appeared in the doorway of the Ely Bowling Alley. The apparition has prompted speculation that the building may be haunted.
Previous Next
Posted Saturday, March 27, 2010 11:00 am

Things are expected to go bump in the night at a bowling alley. That’s what they’re built for.

But at the Ely Bowling Center recently, “things” didn’t go bump in the night so much as show up in silence…from behind…and on camera.

On Feb. 25, a group of women stopped by the bowling alley bar for a friends’ night out. One of them brought her digital camera. While there, they asked bartender Dan Hruby to take a picture of the group to commemorate the occasion. When he finished, he handed the camera back and a few minutes later the women checked out the picture.

In particular, Hruby said they took a close-up look at the expression on one of their friends’ faces. When they did, they also noticed a kind of cloudy image behind her in the doorway to the bar. They zoomed in closer and saw what very much appeared like a human face with a glint in its eye. Before long, the camera was making its way from person to person around the bar.

An assortment of ghost stories naturally followed. Some rendered that it was just some “old bar fly” who came back to check on the place. But curiosity brought out stories about the history of the bowling alley and how an other-worldly presence was said to visit on occasion.

Though current owner Tim Brennan hasn’t experienced any incidents himself, he said he’s heard two main stories regarding ghosts in the building. The first involves a shot of booze—not for humans but for a ghost.

The tale has it that when a glass of whiskey has been placed at the apron of the lanes just prior to locking up for the night, the shot glass was often empty the next morning.

The second story involves a disruption of bowling alley maintenance.

When the lanes are oiled, the staff does the job at night and leaves them to dry. But sometimes in the past when workers returned the next day, they’ve seen a set of footprints on the lanes. Brennan explained that after oiling no one walks on the lanes for two reasons: they’re extremely slippery and nobody wants to ruin the work.

“It’s something you just don’t do,” he said.

Kathleen Olson has worked on the bowling side of the business for eight years and has been a bowler there for far longer. She’s heard the whiskey and lane-oil stories. But she’s experienced an inexplicable one of her own.

She said about six years ago the juke box started by itself and played a “really weird” song she had never heard. She was alone at the time, but two people came into the bowling alley while it was playing and questioned it, too. She told them she didn’t play the song and they looked at the juke. Instead of a song number on the juke’s display, only Xs appeared. She said they were never able to locate the song in the machine. As best she can figure, it might be a hidden track on one of the CDs.

“It gave us all the creeps, because the only words [in the song] were, ‘I’m yours,’ but in a creepy voice,” she said. “Maybe younger kids would know what it is, but I don’t.”

She added that at the time, the bowling alley jukebox did not play random music like their juke does today.

According to information from the Ely-Winton Historical Society and local historians David Kess and Mike Hillman, the current Bowling Center building served a variety of purposes over the years. It was first constructed in 1895 by the Vesi Temperance Society. Among its functions afterward, the structure housed the Finnish Opera House and the Elco silent movie theatre.

To the best of their research or recollection, there are no documented accounts of anyone’s unfortunate or sinister demise within the building. So theories pertaining to disembodied spirits returning to the place where they departed the physical world are difficult to determine.

However, if there is a ghost in the building, Olson has a theory regarding where it resides. If it’s true, the ghost doesn’t appear to be much of a drinker.

She speculated that it only inhabits the bowling alley side. It won’t enter into the bar because that section of the building was added in the late seventies.

“Whatever happened to this being happened on the bowling side,” she surmised. “If there really is a ghost, maybe it happened in the opera house.”

Considering the building’s history, she might be on to something. The purpose of the temperance society was to “combat the evils of drunkenness” and provide wholesome recreation in its place. Perhaps the ghost won’t venture into the bar, but it doesn’t see the harm in accepting an occasional shot of whiskey delivered to its side of the building.

Hruby has worked at the bowling alley bar for almost seven years. He said he’d like an explanation of the face in the picture from a photographic expert. People have guessed it might be a reflection on the camera lens or a human quickly poking their head into the bar. However, he acknowledged the facial tones don’t quite seem to be human.

With today’s photo technology, image alteration comes into question. But Hruby said the women noticed the image in the photo within minutes of it being taken, the camera never left the premises and the bar has no photo enhancing equipment.

Brennan said employees—not customers—bear the brunt of heebie jeebies conjured by the notion of their spirit from another realm. Entering the basement alone late at night or shutting off the lights can create a cold chill and raise hackles.

“It’s when the imagination gets going,” he said. “You start wondering if there is a ghost and if it’s friendly or not.”

To him, the image in the photo seems to be cautious, as if it’s peeking in.

He said he’s hesitant to say if the “ghost” is real, but he really doesn’t want to know. There has never been an issue of someone being threatened. But there does seem to be something otherworldly every so often.

“As long as it’s not out to harm anyone, I’m fine with it being here,” he said.